The Connecticut Chapter of the American Institute of Architects will host the 2019 Connecticut Architecture Conference and Expo (CACX)  on September 12th and 13th at Mohegan Sun Convention Center in Uncasville, CT.

This year’s conference and expo will be held at Mohegan Sun’s Earth Expo & Convention Center, the newest premier 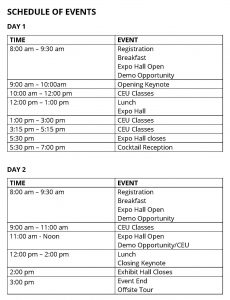 convention destination in the Northeast. With over 275,000 square feet of meeting space, it is the largest expo space along the New York-Boston I-95 corridor and affords us the opportunity to offer more to our attendees and exhibitors.

The Connecticut Architecture Conference and Expo is the premier educational event for architects and the largest gathering of architects in Connecticut, annually.

This year, we are also extending an invitation to architects in the New England states and Westchester County, New York, as well as related associations, and expect attendance to be 300+. For industry partners and related professions, the Expo is an unparalleled opportunity to display marketing information, provide demonstrations, and build relationships.

This free, easily accessible tool will contain all the information for the 2-day event. Check the day’s schedule, follow up-to-the-minute news, and locate booths of interest on our venue map!

With added features this year that include our official Conference app and a Networking Cocktail Reception, this is an event you don’t want to miss. Jared Della Valle has been a real estate professional and architect for more than 20 years and has managed the acquisition and  predevelopment of more than 2 million sf in New York City along the Highline, In the Hudson Yards, in DUMBO and in  Downtown Brooklyn.

Jared Della Valle is Board Chair of the Van Alen Institute, sits on the Board of the the Architecture League of New York, and the  Downtown Brooklyn Partnership and is a member of the U.S. Green Building Council. He has previously taught at Columbia  University, Syracuse University, Washington University, Parsons School of Constructed Environments and Lehigh University.

Jared has widely lectured at major universities and institutions and his work has been the subject of more than 50 articles and  publications including a monograph entitled “Think/Make” published by Princeton Architecture Press. He holds a B.A. from  Lehigh University and Master’s degrees in both Architecture and Construction Management from Washington University, St.  Louis, MO. He is a LEED Certified, licensed Architect in New York State, holds an NCARB (National College of Architectural  Registration Boards) Certificate and is a licensed real estate broker and a Fellow of the AIA (American Institute of Architects). 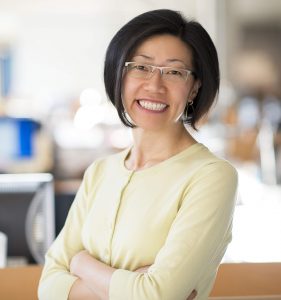 Rosa T. Sheng, FAIA is a principal at SmithGroupJJR, AIA SF president in 2018, and founder of Equity by Design, an AIA SF committee. As a licensed architect with 24 years’ experience in architecture and design, Rosa has led a variety of award-winning and internationally acclaimed projects from the aesthetically minimal, highly technical development of the glass structures for Apple’s original high-profile retail stores, to the innovative and sustainable LEED NC Gold–certified Lorry I. Lokey Graduate School of Business at Mills College in Oakland, California.

As SmithGroup’s Director of Equity, Diversity & Inclusion and Higher Education Studio Leader for San Francisco, Rosa hasn’t been afraid to speak her mind throughout her career. Once, while working on a California-based project from her former firm’s Pittsburgh office she boldly suggested that the client relocate the team instead of flying back and forth for meetings. Her team laughed at the idea, but the client thought it was great and they moved. “That experience was an affirmation to stand up for what you believe in and don’t be afraid to speak up and ask the stupid question,” suggests Rosa. As the Founding Chair of Equity by Design, a national movement created by the American Institute of Architects San Francisco Chapter to advocate for equitable practices and pay in architecture, she has continued to speak up regarding professional issues that move her.   Rosa lead “The Missing 32% Project,” a 2014 Equity in Architecture Survey and research study, which launched a national conversation for achieving equitable practice in Architecture. The Equity in Architecture movement has inspired many and created new connections around the world. Her work has launched a national movement catalyzed by the findings from two pivotal surveys and through provoking discussions in cities such as Boston, New York, Lisbon, Atlanta, Seattle and Philadelphia. Press coverage of her work with Equity by Design includes Architect Magazine, Architectural Record, The Wall Street Journal, The New York Times, TEDxPhiladelphia and KQED/NPR.

Sheng received her B.Arch degree in 1994 from Syracuse University and is also a member of the AIA National Equity in Architecture Commission and the AIA Public Outreach Committee.