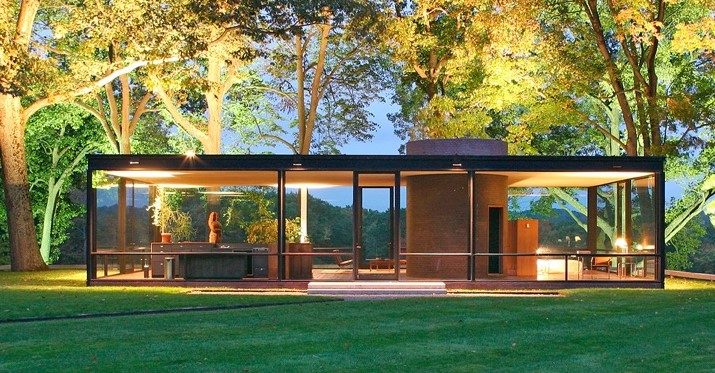 The Glass House, or Johnson house, is a historic house museum on Ponus Ridge Road in New Canaan, Connecticut built in 1948–49. It was designed by architect Philip Johnson as his own residence. It has been called his “signature work”.

The Glass House has been “universally viewed as having been derived from” the Farnsworth House in Plano, Illinois design, according to Alice T. Friedman. Johnson curated an exhibit of Mies van der Rohe work at the Museum of Modern Art in 1947, featuring a model of the glass Farnsworth House. It was an important and influential project for Johnson and for modern architecture. The building is an example of minimal structure, geometry, proportion, and the effects of transparency and reflection. The estate includes other buildings designed by Johnson that span his career. It was designated a National Historic Landmark in 1997. It is now owned by the National Trust for Historic Preservation and is open to the public for guided tours, which begin at a visitors center at 199 Elm Street in New Canaan.

The house is an example of early use of industrial materials in home design, such as glass and steel. Johnson lived at the weekend retreat for 58 years with his longtime companion David Whitney, an art critic and curator who helped design the landscaping and largely collected the art displayed there.